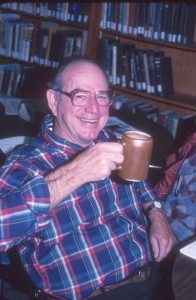 Dan Speake was Leader of the US Fish and Wildlife Cooperative Extension Service for many years. He and Bob Mount maintained a deep friendship from their days as students at Auburn University and shared a love for natural history, especially of snakes. While faculty colleagues, these two performed an important study on the effects of gassing of gopher tortoise burrows on upland snakes, in an attempt to provide data to document damage done by snake hunters at the annual Opp Rattlesnake Roundup. Dan and Bob also were among the founding members of the Gopher Tortoise Society, with Dan’s lasting legacy to that organization being production of Joan Diemer (Berish) as a graduate student who then went on to shape gopher tortoise conservation for decades while part of the Florida Department of Game and Fish. Dan was also inventive, developing an early mobile camera device for examining gopher tortoise burrows. Additionally, he was visionary in his research topics, developing the first repatriation project for Eastern Indigo Snakes, an effort that landed him the 1983 W. Kelly Mosely Award for significant achievement in forestry, wildlife, and related resources in Alabama. Dan retired from his faculty position in 1995 and recently moved to the Huntsville area.